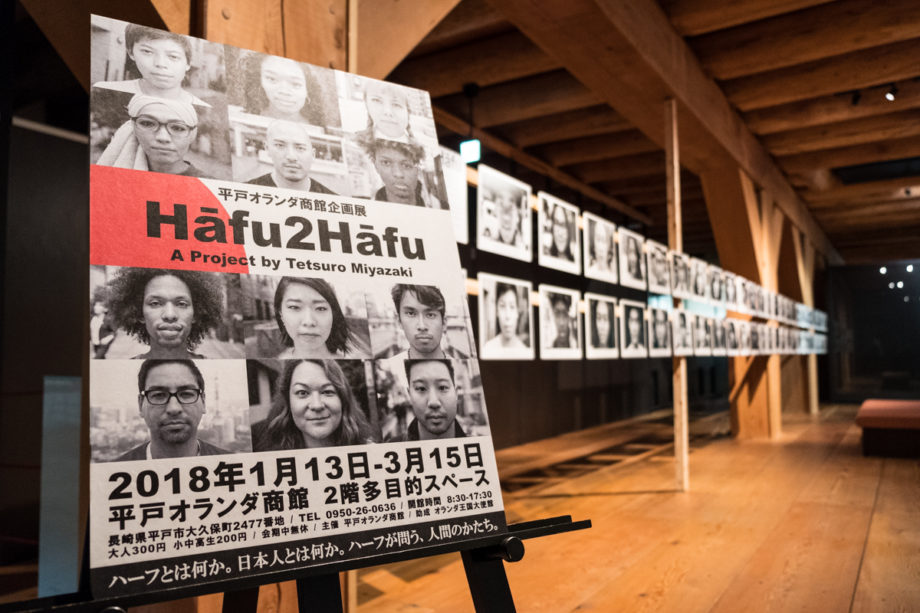 When Dutch traders of the East India Company (VOC) arrived in Japan in the early 1600’s, they first settled in Hirado, Nagasaki. Western and Chinese merchants were allowed to live and mingle with the locals here freely before the Shogun restricted international relations by declaring several Sakoku Edicts between 1633 and 1639. Most countries were prohibited all contact and trading, while Dutch and Chinese merchants were moved to the artificial island of Dejima in Nagasaki in 1641.

We cannot say where the first mixed heritage Japanese / Western child was born, but the mingling in Hirado has certainly led to the birth of a few. Most of them were sent off to Jagatara (now Jakarta) with their Japanese mothers in 1637. This includes Cornelia van Nijenrode, daughter of the VOC-captain and her Hirado local mother.

The Dutch Trading Post – an exact replica of the original 17th century warehouse – is the setting for the first Hāfu2Hāfu exhibition in Japan. 50 portraits and questions of hāfu from 45 different countries from the Hāfu2Hāfu project are exhibited alongside portraits and narratives of early 17th century born hāfu such as Cornelia van Nijenrode (1629) and the Chinese Japanese historic figure of Koxinga (1624).

Tetsuro Miyazaki presented himself and the background of the project to mostly Japanese visitors including relatives from the neighbouring prefecture of Saga. “My Japanese family knows me since I am very little and have been my main connection to the country after my father passed away almost 25 years ago. Being able to share this personal journey with my uncle and cousin today really means a lot to me.”

One of the Japanese attendants said to have never left Japan or even the island of Kyushu. For him, being Japanese is the obvious thing and thinking about his or other people’s identity has never occurred to him. Seeing all the photos and questions and a black board where visitors can leave an answer to ‘what is Japanese?’ compelled him to do so for the first time. He was visibly moved by this realisation.

The Hāfu2Hāfu exhibition in Hirado is supported by the Dutch Ministry of Foreign affairs because it contributes to the Dutch Embassy in Japan’s mission on several levels. “Miyazaki’s artistic work promotes discussions about human rights and mixed heritage identity. This works especially well in the historical context of 17th century Hirado, underlining the long relationship between Japan and the Netherlands.”

Visit the Hāfu2Hāfu exhibition in the Hirado Dutch Trading Post from 13th January to 15th March.